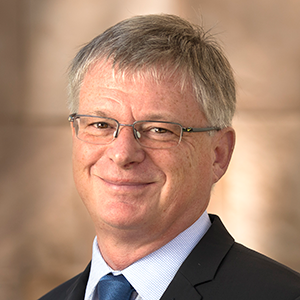 Biography
Stephen F. Kingsmore, MD, DSc, is President and CEO of Rady Children's Institute for Genomic Medicine (RCIGM) where he leads a multi-disciplinary team of scientists, physicians, genetic counselors, software engineers and bioinformaticians who are pioneering the use of rapid Whole Genome Sequencing (rWGS®) to enable precise diagnoses for critically ill newborns. In 2021, he led the RCIGM team to set a new record of 13.5 hours for achieving the fastest molecular diagnosis using rWGS, breaking his previous 2018 world record of 19.5 hours. Dr. Kingsmore came to Rady Children’s in 2015 from Children’s Mercy Kansas City, where he was the Director for the Center for Pediatric Genomic Medicine and Executive Director of Medical Panomic, as well as the Dee Lyons/Missouri Endowed Chair in Genomic Medicine at the University of Missouri-Kansas City School of Medicine. He previously served as President and CEO of the National Center for Genome Resources; Chief Operating Officer of Molecular Staging Inc.; Vice President of Research at CuraGen Corporation; Founder of GatorGen; and Assistant Professor at the University of Florida’s School of Medicine. Dr. Kingsmore is board-certified in Internal Medicine and is a Fellow of the Royal College of Pathologists. He received his MB, ChB, BAO and DSc degrees from the Queen’s University Belfast in Ireland. He trained in clinical immunology in Northern Ireland and did his residency in Internal Medicine and fellowship at Duke University Medical Center in North Carolina. In 2012, Dr. Kingsmore was named MedScape Physician of the Year and TIME magazine ranked his first record-breaking time of 50 hours for genome sequencing among the top 10 medical breakthroughs for that year. In 2013, he received the Scripps Genomic Medicine Award and the ILCHUN Prize of the Korean Society for Biochemistry and Molecular Biology.