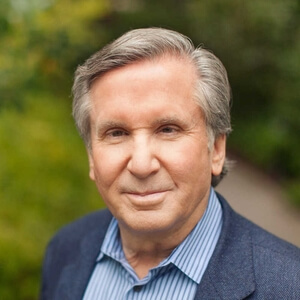 Biography
Brook Byers has been a pioneer in precision medicine, enabling its creation through the financial backing of companies that ventured into the field early and through his mentorship and coaching of their founders. A venture capitalist since 1972, Brook formed the first Life Sciences practice group in the profession in 1984 and then led his firm to become a premier venture capital firm in the medical, biotechnology and healthcare sectors. KP has invested in and helped build more than 125 life science companies many of which served as the foundation of precision medicine through their use of advanced testing, targeted therapeutics, molecular biology, and genomics. Precision medicine companies that Brook has enabled and supported including Genomic Health, Veracyte, Foundation Medicine, Pacific Biosciences, CareDx, Verana, Octave, Cell Design Labs and Arsenal, to name a few, have developed precision medicine products and services to meet the underserved needs of millions of patients. Brook was the founding President and then Chairman of a myriad of precision medicine and biotech companies which were incubated in KPCB’s offices and went on to become public companies. He is particularly proud of Rituxan, a monoclonal antibody therapy discovered at Idec, which he incubated at Kleiner Perkins, serving as the company’s first CEO. Over 4.4 million patients have been treated for cancer and autoimmune diseases with the drug. He has served on the Board of Directors of many companies among them Idec Pharmaceuticals (Chairman), Athena Neurosciences (Chairman), Signal Pharmaceuticals, Pharmacopeia, Onyx Pharmaceuticals, Hybritech (Chairman), and Genprobe. Brook co-founded and is active with the Coalition for 21st Century Medicine. Brook currently serves as a Lifetime Director of the UCSF Foundation, Director of the New Schools Foundation, Member of the Stanford Medical Advisory Council and as Advisor to Stanford Medicine’s Precision Health and Integrated Diagnostics Center. UCSF awarded Brook the UCSF Medal, its honorary degree equivalent and he received an honorary Ph.D. from Georgia Institute of Technology. Brook was elected a fellow of the American Academy of Arts and Sciences and received the Lifetime Achievement Award from the National Venture Capital Association. He graduated with a degree in Electrical Engineering from Georgia Tech University and received an MBA from Stanford.