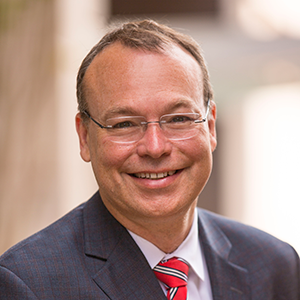 Biography
Jeffrey R. Balser, MD, PhD is President and CEO of the Vanderbilt University Medical Center (VUMC) and Dean of the Vanderbilt University School of Medicine. Serving as the medical center’s chief executive since 2009, he leads one of the Southeast’s largest and most comprehensive academic medical centers with over 26,000 employees and revenues exceeding $5B. VUMC coordinates the Southeast’s largest provider-led health affiliated network, with over 60 hospitals and 6000 clinicians across 5 states. In 2016 he led VUMC through an historic restructuring process with Vanderbilt University, establishing VUMC as a financially and legally separate corporation. A graduate of Tulane University (BS. Engineering) and Vanderbilt University (MD/PhD), he completed residency training in anesthesiology and fellowship training in cardiac anesthesiology and critical care medicine at Johns Hopkins. Joining the Hopkins faculty in 1995, he led an NIH-funded research program aimed at the genetic causes of cardiac rhythm disorders. He returned to Vanderbilt in 1998, became Chair of Anesthesiology in 2001, and VUMC’s chief research officer in 2004. In 2008 he was elected to the National Academy of Medicine, and later that year was named the medical school’s eleventh dean. Over two decades he has led a broad scientific expansion at VUMC, launching programs integrating health informatics, personalized medicine, and precision genomics. In 2016 the NIH awarded the Data and Research Support Center for the US Precision Medicine “All of Us” Program to VUMC.